New Mexico. After a house raid against a drug dealer that goes wrong and leaves two agents dead, FBI agent Kate Macer and her agent partner Reggie are summoned to a meeting at the local FBI office. They are told by their boss Dave Jennings that they from now on will work under new supervisor Matt and his shady consultant Alejandro in a clandestine operation to take out the kingpins of the narcotics trade along the US-Mexican border. Soon they find out that the operation means doing illegal raids with extreme prejudice across the border. That makes them targets not only for the drug cartels but also for the corrupt local police. Transporting a cartel leader from Juaréz to a jail in El Paso, they are nearly killed at the border by his soldiers. Alejandro then leads an attack against a Mexican mansion, killing both the Sonora drug cartel lord and his family in cold blood. In frustration over her marginal role in the operations Kate confronts Matt, who reveals that Alejandro represents a Columbian cartel. 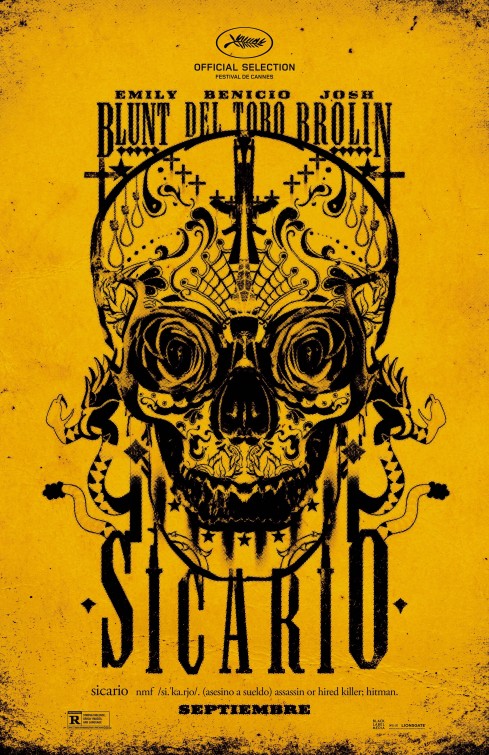 French-Canadian filmmaker Denis Villneuve’s career has been on a slow rise for two decades. Although he has presented his films on prestigious festivals, often Cannes, and won a few prizes, he has not had a major breakthrough. That is until now, with Sicario. Well, perhaps. He certainly delivers all the elements that are at the core of the modern action film: nihilism, ultraviolence, paranoia, misogyny and misanthropy.

Certain scenes reveal a thriller sensibility when it comes to orchestrating the suspense elements for nail-biting impact. But on the whole he is derivative and unsurprising. Although he now seems to be the flavour of the month with the announcement that he is to direct the Blade Runner sequel under Ridley Scott’s supervision, his career so far only suggests that his artistry does not stray far from the middle of the road. The only difference is that the former road was that of art cinema and now it is that of the Hollywood highway.

Sicario (the title is a Spanish word for ”assassin”) is a film that desperately wants to be smart and original but really is only a dim-witted and cynical imitation of previous films about the US drug war, mainly Steven Soderbergh’s TRAFFIC (2000) – down to the subplot of ”the good Mexican cop”, who unsurprisingly turns out to be bad here. And since Traffic is a poor imitation of the far superior British TV series TRAFFIK (1989), this makes Sicario almost unbearably bland and stupid were it not for a few decent suspense scenes and actors.

Emily Blunt, once a promising actress in The Devil Wears Prada (2006) and The Adjustment Bureau (2011), seems intent on wasting her talent in films such as Edge of Tomorrow (2014) and now this. Even more depressing is Benicio Del Toro’s willingness to play the latino drug cartel psycho in two consecutive films about the ‘war on drugs’, the previous being Escobar: Paradise Lost (2014). This might be the consequence of the serious underrepresentation of Hispanics in American film and television reported lately.

Blunt’s character, Kate Mercer, is supposedly the main protagonist, but ends up in the marigins of the operations. Even worse, she is portrayed as rather clumsy and even incompetent – only there to bring some legitimacy to the operation (by the CIA, supposedly). Del Toros character, Alejandro is not in the margins of the operations but in the margins of the story up until the very end. He is basically in the film to take the responsibility and guilt from Josh Brolin’s (CIA) operator Matt by demonstrating his skills of torture, not to mention his enjoyment of such pleasures. While Matt allows for Alejandro to torture, the torture itself is associated with the Latino Other.

Ultimately, the film ends in a maelstrom of nihilism as we are invited to both be horrified but also amused by the flippant use of violence in the film. Like Kate, we are supposed to accept Matt’s and Alejandro’s methods because they, as well as the film, present it as The Only Way. If we – the civilized people of North America and Europe – does not allow for violent operations and torture, we will simply be overrun by the barbarians from the east and the south. In this skewed perspective, ‘the war on drugs’ and ‘the war on terror’ are merging concepts.