With the three-disc release of Gillo Pontecorvo’s The B 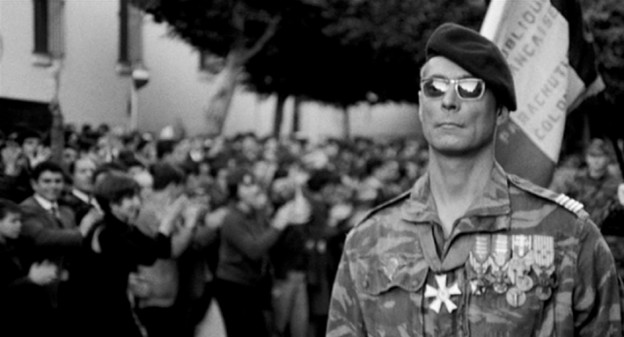 attle of Algiers (La Bataille d’Alger, 1966), The Criterion Collection (region 1) has aimed for the highest standard not only in the technical aspect of presenting a flawless video transfer but also in the packaging of extras. Looking back from the perspective of the post-colonial decades that has passed as well as the latest cinema “waves” (American independent film of the 1980/90s, Dogme’95 et. al.), Pontecorvo’s work packs a narrative power undiminished by time and matched by few other films since then. Besides being a suspense thriller of the highest Hitchcockian order (just look at the bomb scenes), it – sadly – still has a great political urgency four decades after its making.

Among the many hours of extra features of great interest not only to cinema scholars but also to historians and anybody with the slightest interest in international politics, the 28-minute documentary excerpt États d’armes (2002) is especially revealing. It finally spells out what many has suspected but that the French government has denied for long: That torture, summary executions and secret bombings was not only carried out by “bad apples” in the French army or secret groups of local colonialists (the “pied noirs”) but was unofficially sanctioned by the Socialist (!) government under prime minister Mollet.

Ultimately, it is not about individual sadism but cold realpolitik. As the film’s Colonel Mathieu (modelled in part on General Massu, who smashed the Algiers uprise in 1957) puts it to some reporters, it is a question of having a French presence in Algeria or not. (Any parallels with present events in the world seem unnecessary to spell out.)

While on a depressing note, there is also a 37-minute docume 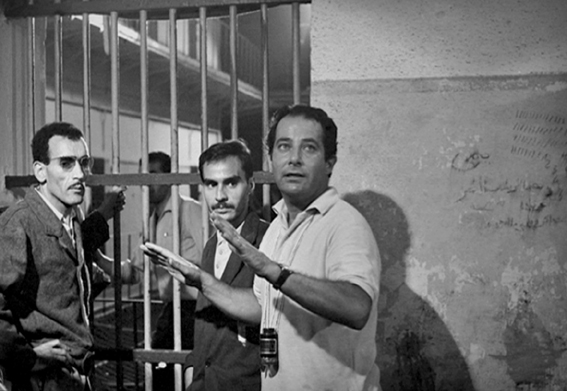 ntary from 1992 on Gillo Pontecorvo’s work by literary critic Edward Saïd. It is a lamentation on the changing face of film producing, making similar type of films unthinkable on today’s cinema repertoire. Or so Saïd claims. After having witnessed the box office phenomenon of Fahrenheit 9-11 (2004) – regardless of what one thinks of it – I am not at all sure that holds true anymore. That we have not seen any new Pontocorvo films for 25 years has probably more to do with the director’s psychological profile. Him being a man of constant indecision, discarding project after project even after years of preparation  – a condition which he himself readily admits to in an interview within the film, comparing it to sexual impotence. This is sad for anybody who has seen the remarkable Battle of Algiers.

Another essential DVD release that expands the cinema experience with some captivating, if haunting, extra features is the two-disc Capturing the Friedmans (2003) by HBO Video (region1). Besides presenting a enigmatic film with more twists and conflicting facts and perspectives  than Kurosawa’s Rashomon (1950), the DVD release features a whole range of interesting extras. Director Andrew Jarnecki makes a valuable commentary track to the film, an disc 2 has debates, outtakes, new interviews etc. that add essential information on the process behind making the film. Together they give you the background of a strange story with a dysfunctional family that finally collapses when the fat

her, Arnold, and one of the sons, Jesse, are found guilty of paedophilia.

That the controversy around this almost 20 year old case in Great Neck, New York, still remains today can be witnessed by a heated debate following the New York premiere and involving among others family members, police officers in charge of the arrest, Jesse’s lawyer and the court judge. It confirms what the many interviews in the film already has hinted at, namely that truth about the case is a fragile construction much based on prejudices, wishful expectations, and in some cases complete fantasy.

Director Jarnecki cuts the between various stories in the film and the  facts of the case, showing that the person interviewed is spinning a story. However, he does not give us the impression that the interviewees do this out of malice or the urge to lie. Rather, they seem to hang on to their tales because it serves their world views. Police officer Galasso, for instance, clearly holds on to the narrative of the hysteria that surrounded the case, and so she spins a fantastic tale about how she found piles of child pornography stacked half-way up to the ceiling and how the whole family was in on it. Cut to the police photos and notes from the arrest, revealing no stacks at all. (There were a few magazines hidden behind the piano; nobody but Arnold knew anything about them.)

Among the films released to comment on the presidential election of last year – Fahrenheit 9-11, Team America: World Police et.al. – the remake of The Manchurian Candidate helmed by Jonathan Demme and produced by Tina Sinatra was one of the most anticipated. By turning the Communist conspiracy into one by Corporate America, fronted by 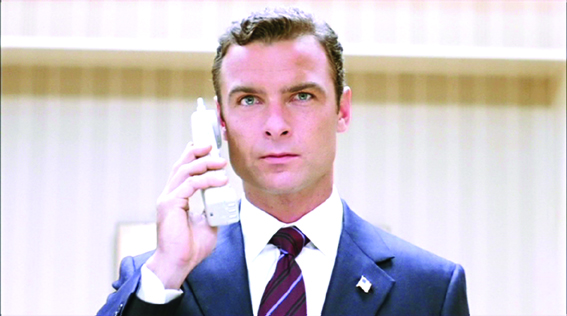 Manchurian Global, the idea seemed inspired. At least on paper. While not an outright failure, it didn’t fare well with the critics or at the box office. One reason is, of course, that there has already been a long line of presidents in the White House in the willing service of the big corporations. No need for behavioural modification brain implants there.

Now released on DVD by Paramount (region 1), most of the feature comments and interviews are of the uninteresting mutual admiration sort with Demme praising the actors and they praising him back. A bit surprising considering Demmes excellent comments on the now-out-of-print Criterion Collection-DVD of The Silence of the Lambs.

Pausing to reflect about the new conspiracy plotting Demme also finds that the film has been outdone by the power elite already in charge. Even so, a study of how the system works and the men behind the Man would be a novelty. But, as co-scriptwriter Daniel Pyne admits, the film stays away from them, leaving them in the shadows, as it focuses on the more sensationalist aspect of the incestuous mother-son relationship from the first movie. But even here Ellie Shaw (Meryl Streep) and her Raymond (Liev Schreiber) never get anywhere near the shock of the tongue kiss between Angela Lansbury and Laurence Harvey in the 1962 version (on MGM DVD, region 1 and 2,  with comments by director John Frankenheimer).

On a decidedly more upbeat note, Warner Home Video has finally produced four important and technically superb DVD transfers from the Alfred Hitchcock oeuvre: Stagefright (1950), I Confess (1953), Dial M for Murder (1953) and The Wrong Man (1957). Missing are feature comments from somebody competent to make much-needed reappreciations of these works(and there should be a few around judging by the number of Hitchcock books) .

Now that all his films from his Hollywood period 1940-76 have been given top notch treatment on DVD (Criterion’s Rebecca, Spellbound and Notorious) or at least decent transfers (Image’s Under Capricorn), we await the same for all the British titles. Except for the two most popular titles  – The 39 Steps (1935) and The Lady Vanishes (1938) from Criterion –  we still have to settle for Laserlight’s shoddy DVD box of most of his earlier works. It has unwatchable video transfers, all inexplicably introduced by Tony Curtis, who has neither seems to have a general knowledge of film history nor has any connection to Hitchcock besides being married once upon a time to Janet Leigh.

A decidedly better treatment has been given Larry Cohen’s early works. Our interview with him in Film International no. 11, was well-timed with a renaissance for the director. Several of his films have just been released by Blue Underground (region 1) with comments by the director-scriptwriter himself. Bone (1972), It’s Alive (1974), God Told Me To (1976), Q (1982) and The Stuff (1984) were all released during the summer/autumn  of 2004, and a double feature of It Lives Again (1978) and It’s Alive III: Island of the Alive (1987) will come out this spring.

Directorial debut Bone was a particular revelation. Though clearly a product of it’s time – coinciding with race riots all over America –  the film’s manipulative power plays between Yaphet Kottos criminal and the waspy white Beverly Hills couple whose house he invades can easily be transferred to today’s society. 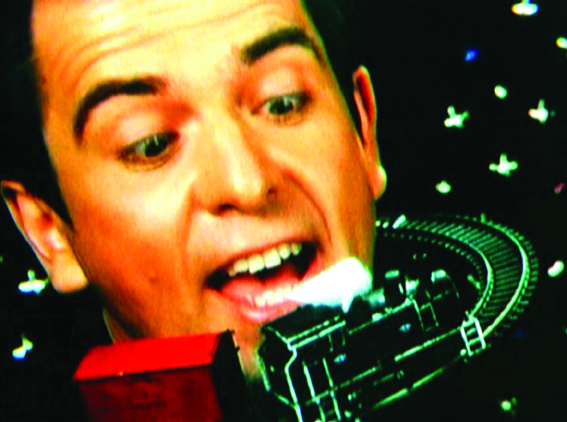 Their conflict is not only one of race but also one of class. Also, the subsequent sexual liason between him and Joyce Van Patten’s bored housewife makes one wonder why sex scenes crossing old racial boundaries are still rarely seen at the cinema screens and on TV.

Finally, the music video collection I have been waiting for a long time: Play by Peter Gabriel. Like Bowie, Gabriel has been in the forefront of advancing the music video as a new arena for experimental film and animation. “Sledgehammer” and “Steam” are the most obvious crowd pleasers, but the simple but beautiful “Red Rain” and the eerie, autobiographical reflection of “Digging in the Dirt” also stand out. I only wish he would, like Bowie, have left the option to screen the videos in chronological order from the late 1970s to the early 2000s. Still, his collection has an advantage that others surely must match in the future: All the songs are remixed in DTS and Dolby Digital for the home cinema surround system.