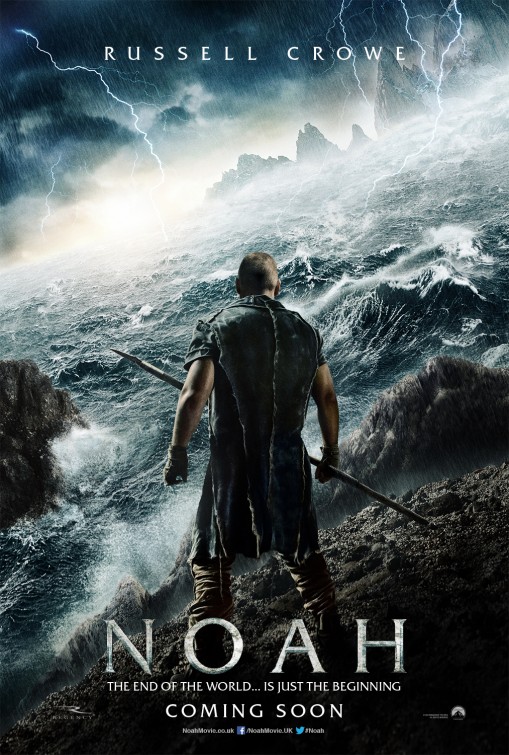 ”All the animals come out at night: whores, skunk pussies, buggers, queens, fairies, dopers, junkies. Sick. Venal. Someday a real rain will come and wash all this scum off the streets.” – Travis Bickle, Taxi Driver.

Few stories are as racy and brutal and outright crazy as those of the Old Testament, often based on tales from the earliest civilizations. The tale of Noah and his Ark has been adapted from the Gilgamesh epic, dating back to 2,500 BC. The classical status of the Bible and other collections of ancient stories makes them irresistible sources of creative interpretations on film especially so since the film companies does not have to negotiate with an author  displeased with the screenplay or demanding payment.

The Old Testament’s story about Noah is compressed into three pages. Notably, it is a story about God the almighty, all wise, infallible etcetera being displeased with his creation. Raging over the creatures made in his image but unwilling to follow his plan, whatever that is,  he intends to start over, though curiously enough with the same creatures he originally created. Well, not exactly, since insects, spiders and microorganisms are not included, neither are plants and fungi besides those Noah takes as his supplies. That is fortunate, because the Ark is hardly a boat big enough to take even two of every species of insects.

If this seems like banter it is because religious texts claim to be true, and that has made Darren Aronofsky look deeper into some practical curiosities. For example, he elegantly solves the problem of how the animals get along on the Ark by putting them all to sleep as soon as they enter his cargo compartments. Why the smoke has no effect on humans remains a mystery, though. Other changes have been made for dramatic reasons.

The Nephilim mentioned in the Bible just before the tale of Noah and has nothing to do with anything else in the Bible is made into fallen angels, The Watchers, who serve the good people. From shining stars in the sky they are burnt into animated stone giants when falling into the many volcanoes on ancient Earth. The remains of their wings still protrudes as grotesque tentacles from their backs. In the film they, of course, becomes Noah’s allies, helping him to build the Ark, that in form and function looks like a modern-day container vessel, and by defending him from his many enemies, superior in numbers.

Regrettably, they are poorly animated, looking like clumsy predecessors of the Transformers, and those are not the only CGIs gone wrong. But Aronofsky does not hesitate from introducing even more radical ideas.

The Bible tells a rather uneventful story about Noah and his nameless wife, here called Neemah, getting on the Ark with their three sons Shem, Ham and Japhet, who bring their wives in order to multiply after the Flood. After a year at sea, they go ashore to do so. God promises  never to set the flood upon the Earth again. Moreover, he learns nothing from history when he, again, sets mankind to rule the planet, although under the supposedly better rule of Noah and his family.

As if underlining this problematic ending, the film makes Noah’s special status as God’s lonely man a study of faith verging on madness. Not much of his relationship with Adam’s youngest son Seth, the good replacement of brother-slayer Cain, is visible. Instead, he turns into an ancient predecessor of psychotic war veteran Travis Bickle in Martin Scorsese’s Taxi Driver. Like Bickle Noah looks at the sinful world from the perspective of an ascetic and self-sanctified outsider and condemns it to an apocalypse.

He sees the flood as a cleansing of the Earth from all scum and filth,  and that includes everybody, also his own family. Noah’s wife and children are depicted as members of a cult who follows all the whims and revelations of the Great Leader. They only hesitate when he – like Abraham with his son Isaac – is thinking about killing members of his own family to fulfil God’s plan,  as he sees it. Just as modern-day cult leaders, Noah never explains the world in rational terms or by a transparent ideology, but wraps it in myths and tales with a moral coda.

Another dramatic effect is the removal of the wives of the three sons. Now, the only woman in the family besides the mother is the adopted girl Ila, who becomes Shem’s bride, thereby triggering a violent envy in the younger and love-sick brother Ham. Japhet, the youngest of the three sons, has still to reach the age of raging hormones, but he is also something of a ticking bomb. Still, this cult and family drama is not enough for Aronofsky’s epic apocalypse.

In the battle for the  Earth’s future Noah is  given an opponent who matches him in brutality, while not suffering from any conscience: Tubal-cain, the descendant of Cain the original murderer. He is only briefly portrayed in the Bible as ‘the master of all coppersmiths and blacksmiths’, but Aronofsky makes use of a Jewish tradition that regards him as the first weapons-maker. Thus he is made into an even more bloodthirsty version of his forefather, Cain. An odd coincidence is that he has a sister called Naamah, which rather sounds like the name of Noah’s wife in the film: Neemah, though Aronofsky never elaborate on this.

As if responding to the climate change and other current ecological threats, Noah and his family are made into ecologically conscious vegans, who only takes exactly what they have to in order to survive. Tubal-cain and his clan, on the other hand, literally rip the flesh from everything that lives, man or beast. An ordinary day in their village is one of slave-trade, rape, murder, ecological mismanagement and a generally poor attitude problem. These extremes between Noah and Tubal-cain makes the already laughably pompous scenario surreal, which to me is an asset and not a liability vital for the genre of Biblical Epics.

The epilogue on a mountain that might or might not be Ararat looks like the promise of a follow-up. In the Bible Ham sees Noah drunk on wine and naked after the first grape harvest. When the father wakes up with a hangover and  yet another fit of rage, he condemns Ham’s descendants to be the slaves of his brother’s descendants. In the film we only see Ham leave his family after the incident . He goes  out into the new world as the first backpack tourist, leaving the other to multiply.

In anticipation we therefore await the inevitable sequel Noah II: The Return of Ham, with the equally inevitable  tag line: ‘He’s back and mad as hell!’ No wonder, since the family he left behind will be a hothouse of incest and inbreeding.